On Tuesday the Team at Collision Pros held the ceremony for the winner of their first car giveaway. This was their first car donated as part of their “Key’s to the Future” initiative and as the Grand Opening kickoff of their reopened Paradise store. 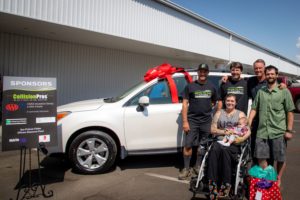 The free car recipient was Terra Hill, a single mother of five children. On the morning that the Camp fire ripped through Concow and surrounding cities, Terra and her best friend were asleep in her home. Terra awoke to an orange glow outside her window and flames engulfing the building. She was terrified as she ran to get herself and her roommate out of her home. They got into a truck and tried to flee but the heat from the fire melted the rubber on the truck and it stopped running. Terra, now stuck, watched as her friend burned to death and then watched her own body begin to melt away.
It was a miracle that, at just that time, first responders were in the area and pulled Terra from certain death. Terra was then life-flighted to the hospital where she was in an induced coma for two months. After coming out of the comma Terra was in the hospital for months for additional treatment and rehabilitation. Now Terra is at her new home in Chico, but she has years of surgeries to come. She will likely always remain in a wheel chair, but she continues to improve with each surgery.