You are here: Home / auto body / Pros and Cons of Hybrid vs Plug-In Hybrid 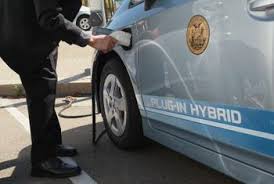 The definition of “hybrid” is simply, mixed origin. The hybrid vehicle uses both the gas combustion motor and an electric motor. They work together to deliver the maximum fuel efficiency and range of travel.

On top of the hybrid and plug-in hybrid, there is also the fully electric vehicle that many think will replace the hybrid and the gas motor. The electric vehicle is powered only by a battery and has no ability to run on anything else. They are limited to a range of usually under 300 miles before they need to be charged. This varies based on the battery size, the driving habits and the traffic patterns.

The conventional hybrid of today uses the gas powered motor to keep the battery charged while you drive. These hybrids offer substantially better gas mileage than the full combustion gas motor while in traffic. This is because they also recapture energy while braking. However, the hybrid still doesn’t get much better gas mileage while on a steady commute, because it loses

The hybrid does not have the ability to be plugged in to gain additional charge to the battery, where the plug-in hybrid does.

Many auto manufacturers have taken to the plug-in hybrid to allow greater mileage range and fuel economy. There plug-in hybrids take larger batteries than the typical hybrid. This additional battery and increased charging system, adds substantially to the cost of the vehicle. The added cost can be several thousand dollars. The vehicles can be charged on either 120-volt or 240-volt household electricity. The charge time for the 240-volt is usually less than half of that of the 120-volt charge. But, installing a 240-volt charging system in a garage that doesn’t have 240-volt electricity can cost several thousand dollars.

The ability to charge the battery means that the can drive some short distances without any gas use. They are however limited to usually under 25 miles though.

When you look at the ownership of a hybrid or a plug-in hybrid, you have to look at the added cost vs the benefits. Do they make financial or environmental impact sense over the combustion motor? In most states where gas is cheap and traffic is light, it is harder to make these cars make sense. However, in states like California, where traffic can be heavy (helping the vehicle recharge) and the state offered rebate programs, they can start to make great sense. Another benefit is that, often in the cities with the heaviest traffic, these vehicles can have the right to use commuter lanes, saving a ton of time and money sitting in traffic.

The Decision to Buy Hybrid vs Plug-In Hybrid vs Electric

The ownership of a hybrid is a complicated and often is more than just math. For many it’s important to minimize their environmental impact. For others, it’s the belief that the combustion motors of today will have minimal value in the future. Whatever the reason, it appears to be our future. All major manufacturers are putting their focus toward hybrids, plug-in hybrids and fully electrical cars.

Because these vehicles are built lighter for fuel efficiency, they tend to be built with very special materials that allow for weight savings while still being able to absorb the inertia of a car accident. This makes it imperative that they are repaired by a collision repair shop that has the tools and the training to repair the car safely.

If you are in an accident in Northern California, stop by any Collision Pros location. They are all trained and equipped to handle the very latest in technology.

SELECT COLLISION PROS LOCATIONS ARE TESLA CERTIFIED COLLISION REPAIR FACILITIES Tesla owners in Northern California can depend on us for Tesla approved collision repair. Collision Pros is proud to be part of the Tesla Approved Body Shop Network with our long-standing tradition of quality auto body repairs and service. If you are looking for the […]

One of the more common questions we get is “How do I treat new paint after a repair?” In most situations when you take your car into an auto body repair shop it will involve some repainting. After your car gets new paint it is important that you follow a few steps to make sure […]

In Northern California the summers can get scorching hot and put significant strain on your cars air conditioning system. For efficiency you’ll want to make sure that first your system is working correctly and second, that you are doing these 6 things to keep your car cooler this summerIf you are struggling to get your […]