Why Didn’t my Airbag Go Off?

Why Didn’t my Airbag Go Off? 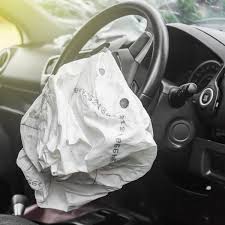 About a week ago I got a call from a family member stating that his wife had been in an accident. She was alright, but they were very shaken up and he asked me, “Why didn’t the airbag go off?”

After I got a little more details on the accident, we both realized that the airbag worked as it was supposed to. However, I realized that this is a common question and blog might help even more customers. So, I’ll do my best to explain the airbag system and why an airbag might not go off.

Over the last 30 years that the airbag system has been around, manufacturers have made a lot of improvements and changes. It’s an evolving science and every manufacturer and sometimes even model has its own system. You really don’t need to know a lot about the airbag system except the basics of how it works and how you can be sure it is going to work when you need it.

The airbag module is the explosive element used to inflate and propel the airbag to keep you out of the dash or windshield when in an accident. There are two main propellants used today. They can be used alone or together as a hybrid in some cases.

1. Sodium Azide– This is the most popular propellant. It is a solid compound and a type of rocket fuel. It’s been popular because it’s so stable and predictable that it’s use in airbags is very safe.

2. Compressed Gas– Today we are seeing more and more compressed gas or hybrids of compressed gas and sodium azide airbags. The benefit is that, when ignited, they inflate 3 times as fast as the sodium azide bag. The speed is more important in side impacts where the times needed before impact are much shorter.

There are all kinds of airbag sensors used today. How the sensor works depends entirely on what type of crash that the car is in. Sensors are really just switch that activate the airbag when a predetermined set of circumstances exist. For example, the front airbag will use the g-force generated by the impact as one of the parameters to ignite the airbag. It will also use the angle of the impact. If the impact doesn’t cause the vehicle to slow or stop abruptly, the g-force may not be enough to send the occupants into the windshield, therefore, it may not go off. If the collision impact is at an angle that will not throw the occupants forward, it may not go off. Remember, the point of the front airbag is to prevent injury from being sent forwarded. You do not want an airbag to go off unless it is necessary. Airbags can cause injuries too.

While the airbags are an important part of the vehicle safety system to keep you from propelling forward, the seat belt is also important in stopping some very serious injuries. The seat belt deploys by igniting a pyrotechnic charge connected to the belt. This assists the airbags by holding very securely in an accident. Not all safety systems have pretensioners in the seat belts. The ones that do, usually, are designed to deploy seatbelt pretensioners during a rear-end collision to stop the occupant from being thrown forward.

While the airbag is a safety item put in the car to prevent very serious injury, they can cause minor injuries themselves. You do not want one going off in your face, if it’s not needed. An airbag uses an explosive propellant to cause the airbag to inflate quickly, traveling as much as 100 mph. While you are being thrown forward. You do not want this system going off unless needed. The auto manufacturers have really come a long way in determining when the airbag is needed.

It is not uncommon to see passengers driving with their feet on the dash or drivers to place their hands in the center of the steering wheel. You do not want your airbag to go off when you are doing these. I have heard horror stories of customers who had airbag deploy while their passengers feet were on the dash. Be aware of what is in front of the airbag.

If the airbag system has a faulty component, it will illuminate a light on your dash. Your car should not be driven with that light on. It is very likely that your system will not function the way it should. Take it to a body shop that understands the airbag system

If you have any doubt that your airbag is working correctly, and you are in Northern California by any Collision Pros location in Auburn, Chico, Red Bluff, Woodland or Loomis, stop by and let us take a look at it for you.