You are here: Home / Automotive / Will Bug Splatter Stop the Self-Driving Car? 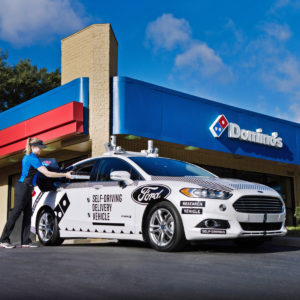 Before autonomous cars become mainstream someone will have to find a way to keep bugs splatter and other debris off of the sensors. The big question is, Will Bug Splatter Stop the Self-Driving Car? If you ask Ford, they will say “no”. They have some unique designs to prevent debris on their sensors. I’m sure other manufacturers will deal with this in similar ways, in the race to be the first legal autonomous car.

Human drivers use windshield wipers to be able to see in rain and snow or clear bug splatter. A driver can turn on the windshield washers when rain, dust, insects or mud block their vision. With the autonomous car, it’s not that simple. Self-driving cars are outfitted with sensors that are used to view their surroundings. These include forward facing cameras, lidar and radar. These sensors are as important as a human driver’s view. Just like the windshield of a driven car, sensor need to be clear of road debris to operate correctly.

Ford has dedicated a lot of resources over the last couple of years to solve the problem of road debris on the sensors. Ford hired a zoologist, Mark Hostetetler, to understand the type of bugs and the behavior of the bugs causing the bug splatter. Fords take away from their research is, that it’s better to avoid bug splatter to begin with. They created some clever ways to combat the debris.

The solution was changing the flow of air around the lenses to push the bugs out of the way before they could hit the sensors. In testing the airflow didn’t appear to be enough to solve the problem, so Ford integrated a cleaning system that has small nozzles that spray the sensors under pressure to remove debris. Ford uses an advanced software algorithm to determine when the sensor is dirty. It then uses pressurized air to assist in the cleaning and to dry the sensor. The cleaning of debris off of the sensors isn’t an optional feature. This is a critical function of the future self-driving vehicle.

So, will bug splatter stop the self-driving car of the future? Not likely, but it’s certainly an important piece of the puzzle. However, there are a number of reasons that I have written about in the past, that will likely make the autonomous car still something we won’t see for years to come.

If your paints fading, your likely to ask yourself, “How do I fix fading paint on my car?” Let’s try to answer that by explain what it is, the causes, and some solutions. When paint starts to fade it not only looks bad, but you lose the protection of the metal. Paint has two functions, […]

Rear end accidents are very common and the common belief of most people is that it is the fault of the driver in the rear. The assumption is that if the driver was at a safe distance the accident wouldn’t happen. In California this is not always the case. However, that said, it is most […]

No matter if you have been in a major accident or a minor parking lot accident, auto body repair, done correctly, is expensive. Collision Pros offers these 3 tips to help you save money on auto body repair work. Repair Rates Every shop has their rates that they charge per hour, often called their “Door […]